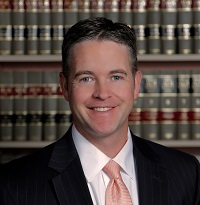 He was admitted to practice law in Nevada in 2003 and joined Allison MacKenzie Law Firm in 2004. Ryan’s areas of practice have focused on litigation, administrative law, and business law.
Currently, he serves as a Judge Pro Tem (substitute judge) for the Carson City Justice and Municipal Court, and serves as Carson City’s representative on the State Bar of Nevada’s Board of Governors.

Ryan’s impressive legal advocacy has been recognized by Legal Elite – Nevada Business Magazine in 2012, 2013 and 2017. Further, in 2013, Volunteer Attorneys for Rural Nevadans honored him with the award for Outstanding Service for the Lawyer in the Lobby Project. He is AV® Preeminent™ Peer Review Rated by the Martindale Hubbell Law Directory and his Avvo rating is 10, the highest possible.

Ryan has felt the calling to be a judge since he was an extern with Judges Griffin and Maddox after his first year of law school. This goal has only strengthened over time, especially through his experiences as a Judge Pro Tem on the bench in the position he seeks to fill. Ryan stated, “I have learned that the role of the judge is a humble and critical one which can only be filled properly with an eye toward the rule of law and the fundamental principle of justice.”

By serving on the bench, Ryan hopes to be part of furthering the safety and vitality of the community by ensuring the court is run expeditiously, fairly, and evenly, with each individual in the courtroom afforded the respect and decorum of the court itself.

In relation to Justice of the Peace position, Ryan believes that the biggest issue facing the community is that of addiction. “Addiction is at the core of many crimes, and certainly at the core of repeat offense, and even is an issue in many civil matters. Our court, through a comprehensive team approach in both misdemeanor addiction court and mental health court, is taking huge strides to address the fundamental issue of addiction. The successes of such programs are reducing recidivism; and thus, improving our community,” Ryan said.

Additionally, Ryan volunteers for the Boys and Girls Club of Western Nevada where he served as President of the Board of Directors, in 2009, and is an active member of the Carson City Rotary Club.

Russell resides in Carson City with Sarah, his wife, and their three children.