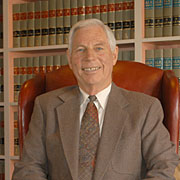 George Allison co-founded the Carson City, Nevada-based law offices of Allison MacKenzie out of the firm known as Laxalt, Berry & Allison. He provides his clients with a solid background of trial experience with primary concentration in insurance defense law, which includes the areas of premises liability, employment termination, construction claims, civil rights issues and environmental contamination exposure cases. George Allison has also practiced in the area of business torts in cases dealing with fraud, defamation, professional misconduct and breach of contract. He is also a trained and experienced mediator and arbitrator and has acted in that capacity for both parties in private litigation and for the Nevada Supreme Court in the appellate process.

George Allison was admitted to practice law in the Silver State in 1963 upon completing his law degree from the University of California, Hastings College of Law. His experience includes oral arguments before the Ninth Circuit Court of Appeals and the United States Supreme Court. He is a past member of several national trial organizations including the Association of Defense Trial Attorneys, American College of Trial Lawyers and American Board of Trial Advocates. He holds a membership with the Washoe County Bar Association and First Judicial District Bar Association. George Allison is also a member of the State Bar of Nevada and American Inns of Court, Bruce Thompson Chapter.

In addition to his civilian practice, George’s trial experience includes trying criminal cases as  Judge Advocate General Officer while in Vietnam for a year during the war. He recently published a book titled “An Army Lawyer’s Military Experience” describing those cases. The book is available on Amazon.com and through Carson Street Publishing in Reno (carsonstreet@sbcglobal.net). Please email info@allisonmackenzie.com for more information.