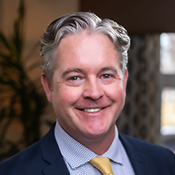 Ryan Russell, who joined Allison MacKenzie in 2004, offers his clients a comprehensive background of practice areas. As an attorney and partner with the law firm, he practices in the areas of education law, administrative law, arbitration, healthcare law, and business law. Ryan Russell received his Bachelor of Science in Business Administration and Management from the University of Nevada, Reno in 2000. He then pursued a degree in law and graduated from the University of Nevada’s William S. Boyd School of Law in 2003. That same year he was admitted to practice law in the State of Nevada.

In addition to his work with Allison MacKenzie, Ryan is active in the community and served as Carson City’s representative on the State Bar of Nevada’s Board of Governors for six years.

He is a past member and president of the Boys and Girls Club of Western Nevada.