Another Piece of Nevada is Lost 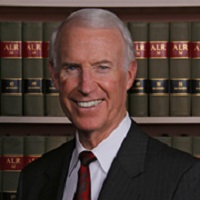 Andrew, better known as Andy, was born on his family’s ranch in Yerington, Nevada. He was the fourth of five children of Albert “Burr” and Marion, including Al, Fred, Madeline and Mary Lou.

Andy enjoyed his upbringing in Yerington, making friends, working on ranches, playing football, excelling in scholastics and having more than his share of fun. His accolades from high school included being elected Governor of Boys State and later being inducted into the Yerington High Football Hall of Fame.

Andy’s love of people, good grades and good times continued at the University of Nevada, where he met many more life-long friends as a member and president of Alpha Tau Omega, as Captain of the ROTC and as a member of various social organizations.

After the University, Andy attended and graduated Georgetown Law School in Washington D.C., married (LeeAnn), had a son (Chris), and then was off to serve for two years in the U.S. Army. There, while stationed in both El Paso, Texas and Homestead, Florida, he attained the rank of Captain.

Upon completing his obligations to Uncle Sam, Andy returned to Reno to commence his career as an attorney with the law firm of MacDonald Carano and have a daughter (Katie Paige). After a few years, he and his family relocated in 1972 to Carson City, where he was hired by the law firm of Laxalt, Berry and Allison, which he nurtured and helped lead to become the firm now known as Allison MacKenzie, Ltd.

Along the way, Andy’s love for Nevada and its people shined through. He was a President of the Carson City Rotary Club, a member of the University of Nevada Foundation, a Director on the Reno Rodeo Association, a member of the Nevada State Commission on Judicial Discipline, a Trustee of the Hop and Mae Adams Foundation, a Director on the Nevada Delta Iota Building Association, Wagon Master of Poor Man’s Bohemian Grove, and an officer of the Carson Valley Nut Club. Along the way, he did quite a bit of work behind the scenes for various causes.

Andy truly loved meeting people and getting to know their stories. His happiness and easy laugh were infectious. He loved Nevada, good country music, to spend time with family, to provide sage advice to clients and to throw great parties. He gathered a broad array of very good friends of all ages along the way, and met and married his wife, Karen Peterson, with whom he shared his later years and who provided amazingly loving care as the sun slowly set for him.